The marriage of maple and oak: fall in love with B & E’s Bourbon Barrel Aged Maple Syrup 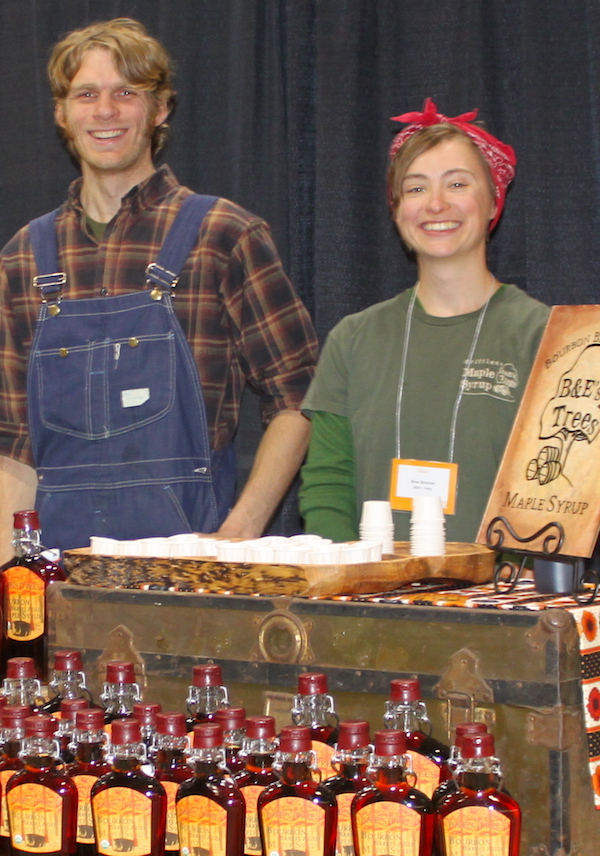 With the recent release of their Vintage 2017 batch of bourbon barrel-aged maple syrup, Bree Breckel and Eric Weninger have hit their stride. It’s their third batch, and they’ve gathered resources, earned fans, and created crazy demand.

"Folks are eating - or drinking it- faster than we can fill the bottles!" says Bree.

B & E’s Trees has risen to regional fame with their inventive collaboration, combining the luxury of pure maple syrup with the decadence of bourbon. Their secret is to age the maple syrup in barrels formerly used to age bourbon which creates a precious sweetness. The symphony of maple and oak is an inspiration that belies the imagination—no longer just for pancakes, you’re motivated to go full out and do waffles. Or better yet, use it to add nuance and depth to countless other savory concoctions and delightful mixed drinks.

Bree and Eric started mapling by selling bulk to Maple Valley Co-op, with both working off-farm jobs to support their maple habit.  Then in 2013 a good friend connected them with Central Waters Brewing Co., and a plot of deliciousness was hatched.  Central Waters would source fresh Bourbon Barrels, B&E would use them to age their maple syrup, and then the maple soaked barrels would return to the brewery to age their Maple Barrel Stout.

The initial batch of Bourbon Barrel Aged Maple Syrup hit shelves in the Autumn of 2015, and an extremely limited release of the Maple Barrel Stout was launched at the brewery in April 2017.

But it hasn’t been easy. The initial pilot batch was small, and since the process involves an additional waiting period after condensing the syrup, there was a dry spell. “It’s difficult trying to get retailers interested when you have no product,” laughed Bree.

But with Bree’s charm and her understanding of retail—she once worked at the La Crosse People’s Food Co-op—the unique syrup has really taken off. They got a boost from a 2015 Buy Local, Buy Wisconsin grant to expand their sales, having purchased their land with a Farm Service Agency loan and adding on through a land contract agreement. “Mostly we’re self-funded though,” says Bree. “It was terrifying but we had to do it,” she says of the decision to have Eric work full time in the business and end his six and a half years of commuting to Milwaukee from La Crosse.

Their attractive product is now distributed to some places outside of Chicago and the Twin Cities, even as far as Fort Collins, Colorado.

“Mostly we’re in Wisconsin,” Bree smiles. “We’re in lots of co-ops, because co-ops are the best,” she adds. She prefers to seek out independently-owned stores, and find a good rapport with those business owners, feeling that “they’ve grown a business so they know what it’s like.”

Bree is a pro at talking with customers. She smiles easily, shares samples, and earns fans one sip at a time. Beyond putting her sociology degree to great use, Bree has an intrinsic understanding of how to connect with people, whether it’s a store that might sell their syrup or a customer that might make it their new favorite. “Authenticity is important to us,” she says.

“It’s important for us to be operating in a way that’s genuine, sustainable for the land, making jobs while allowing us to support ourselves.” One visit to their website, and the striking pictures will serve as testimony to the hard work, teamwork, and beauty of the effort.

They believe in word of mouth, and have a spot on their website for recommendations—let them know if you know a store that needs to know B & E’s Trees. They’ve also got a handy “where to buy” map so you can see which stores near you might already be stocked with that new Vintage ’17 Release!

Bree and Eric first attended Feast in 2015, and will return a second time for 2017. "Feast was a great event for us to network with other businesses," she says. "We got a ton out of it and are looking forward to going back."

If you head to Rochester for the Feast! Local Foods Marketplace festival on Saturday, Dec. 2, you’ll be able to meet Bree, plus sample and stock up on B & E’s Trees. They’ll have a variety of sizes, making it easy to gift fellow foodies… or anyone who enjoys pancakes.

Catching up with Bree (video)