Viroqua, WI (October 13, 2014) – Fifth Season Cooperative, a food hub centered in Viroqua, Wisconsin, is making serious headway in bringing local food to greater numbers of people. They’re making it easier for the consumers by bringing it to restaurants, hospitals, and schools. And they’re making it easier for the member growers, by taking care of the sales and distribution.

“The co-op is the members,” says Diane Chapeta, operations manager and all-around local foods mover and shaker. With grower-members from a 150-mile radius around their hub in Viroqua, Fifth Season has attracted interest from many people championing the efforts to provide local food to a wider range of consumers.

That’s exactly what Fifth Season has been doing since August of 2010. They aggregate produce from farms of various sizes to accumulate quantities that are sufficient for bulk institutional buyers such as schools, hospitals, and restaurants. These buyer-members and distributor members such as Reinhart have been happy to take advantage of the local seasonal bounty provided in quantity from Fifth Season, and since last year have also been able to purchase some locally-grown food year-round.

That’s because the co-op is gearing up for its second year of sending member-grown produce to a processing facility to become “clean-processed” into one of their frozen blends—the blends have no additives, they’re just preserved to extend the season of enjoyment. The first two blends, introduced in the fall of 2013, are the Wisconsin Potato Fusion and Winter Moon. A big hit with institutional buyers, these blends are colorful, with a rustic, large cut, and are versatile for a wide range of recipes, many of which can be found on the co-op’s website, fifthseason.coop. 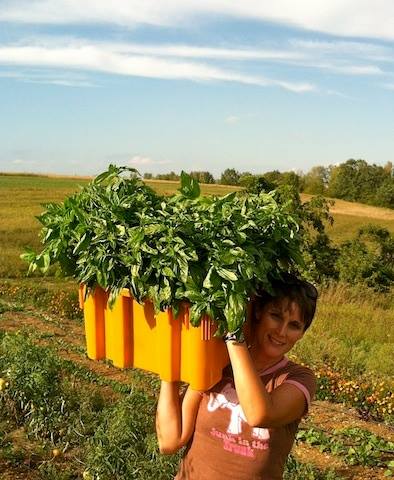 Coming soon will be two new blends, which Chapeta and her network of partners are busily working to develop right now. Trials, consisting of three test locations, interviews with taste-testers, and analysis, will hopefully bring two more blends to the market. Just what’s in those new blends is still under wraps, but seasonal and value-added products are listed on the co-op website, so stay tuned.

Chapeta says she’s looking forward to making connections in Minnesota at the Feast! Festival and Tradeshow on November 2nd and 3rd, including growers wanting to join, processors with a product to add to their distribution line, and buyers looking for more local foods.

“The two-day structure of the Feast event is a great idea,” says Chapeta, “We’re looking to expose our name, and while much of our product goes to institutional buyers, everyone buys somewhere.”

The Feast! Festival on Sunday, Nov. 2 is open to the public, and will be a great time to satisfy your curiosity for local foods. Visitors will be able to taste and purchase a variety of foods that are made throughout Minnesota, Wisconsin, and Iowa. Meet the farmers and artisans and hear the stories behind the food. Admission to the festival is $5 for adults and $2 for children. There is an additional charge for sampling the local beer, wine, and hard cider.

Following the Festival, the Tradeshow on Nov. 3 will offer an exclusive experience for exhibitors to network with buyers.

For more information about the Feast! Festival & Tradeshow, please visit www.local-feast.org. To keep in touch with the latest updates, like Feast! Local Food Network on Facebook, follow @Local_Feast on Twitter, and use #localFEAST to make sure your voice is heard.