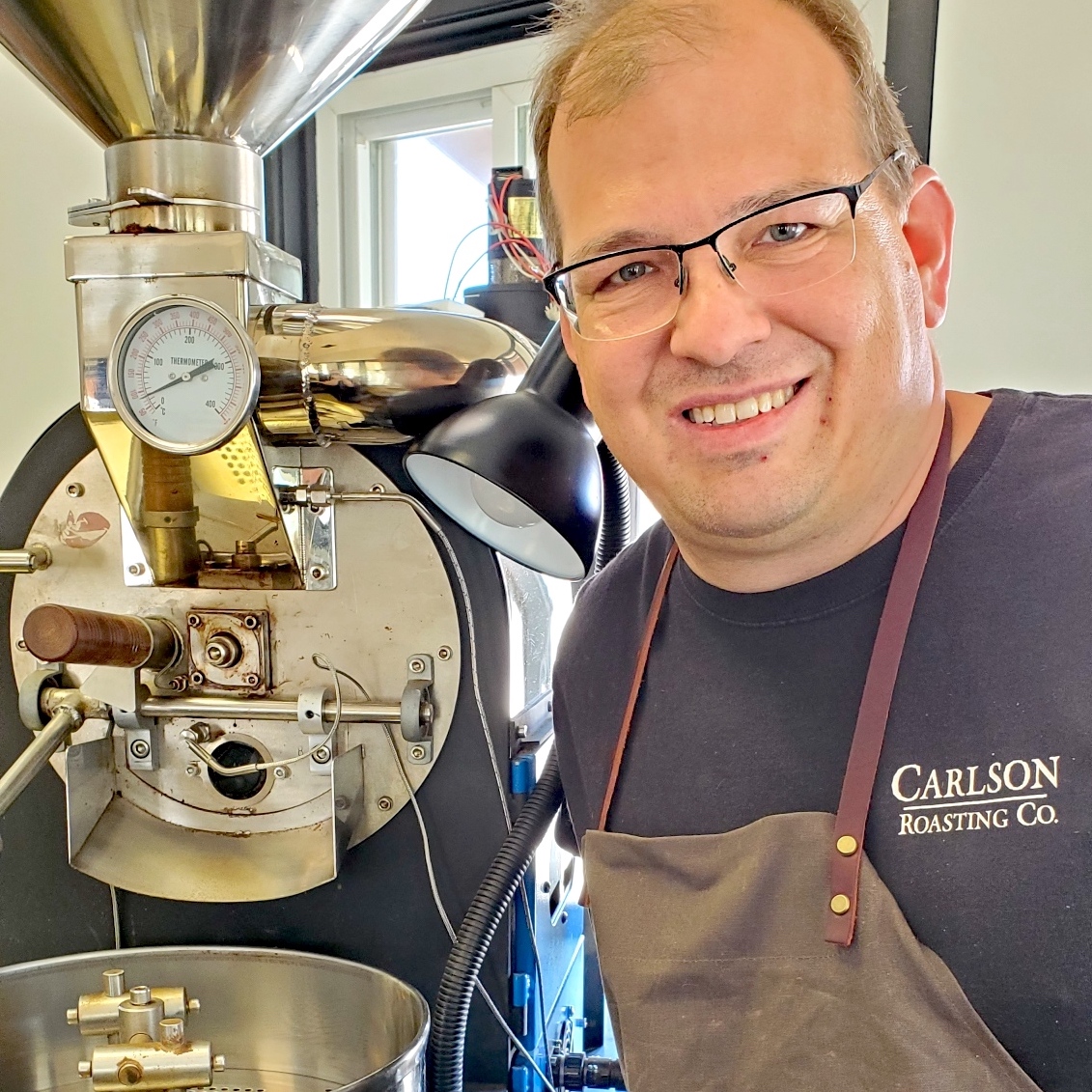 To talk with Bob Carlson, you really get the sense that he loves what he’s doing—essentially, he loves coffee. But the Carlson Roasting business that he’s built since 2016 is much more than sourcing quality, fair trade, organically-grown beans and roasting them to perfection—it’s very much about the service of it all.

You see, Carlson’s main customers are coffee shops. Yes, their coffee is in a handful of retail locations (area co-ops, Hy-Vee’s in Rochester and Winona for example), but for years the focus has been the cafés—like fellow FEAST! entrepreneurs CannonBelles, who have a Coffee & Ice Cream shop in addition to their cheesemaking. Bob enjoys sharing business tips, and providing his perspective on how to improve things. “It’s almost like being a partner,” he says.

It’s also meant slow going during this unusual year of COVID, so Bob has innovated with the times. Not only does he sell coffee online through his website, but also offers subscriptions, and has recently answered the demand to offer pre-ground coffee. But he strives for freshness: “It’s not roasted until the order’s placed.”

In college, he upgraded to an espresso machine, and is now what you might call a coffee geek, waxing on about the “almost grassy” light roast coffee now fashionable in California...and how water chemistry plays into the taste. He’s upgrading an old Turkish roaster in his spare time, and has some new experimentation in the works (no spoilers!), building on the bourbon barrel aged coffee he produces in collaboration with Rock Filter Distillery.

Carlson Roasting has been a consistent presence at FEAST!—have you given them a try yet? Stay in touch with the links below. 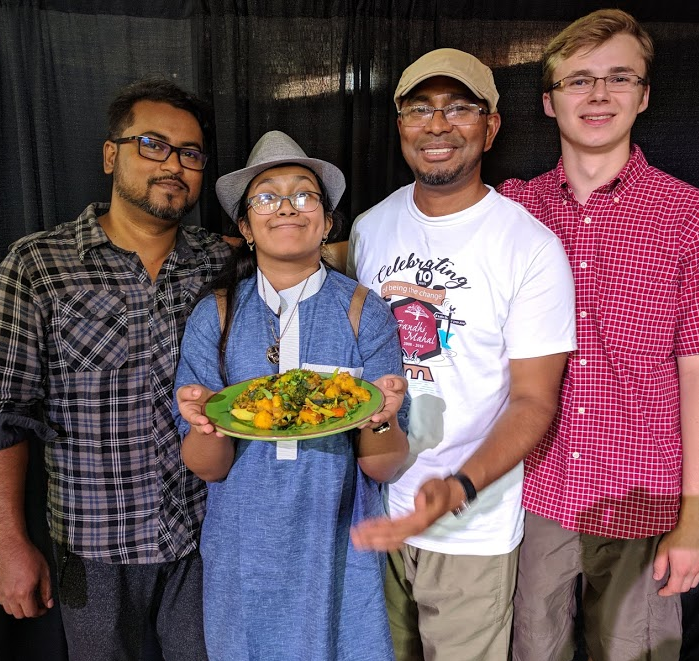 "Food is the True Wealth," Ruhel Islam told us in 2015 when we interviewed him for our Minnesota State Fair agriCULTURE exhibit. Our plan was to share and celebrate the wonderful and varied food traditions that have been born and shaped in Minnesota, and Gandhi Mahal was a perfect place to start. At the time, Ruhel and his crew were harvesting thousands of pounds of fresh produce from more than a dozen vegetable plots in backyards and on rooftops throughout their South Minneapolis neighborhood. He was especially proud of their new basement aquaponics system which was providing herbs and tilapia for the restaurant. He brought some of his first fish crop to our exhibit where he shared his restaurant's famous Bangladeshi Tilapia with hundreds of fairgoers.

Ruhel says his deep care for improving our food system and food security stems from his rural upbringing in Bangladesh, as well as a commitment to supporting one's community. He's made charitable work central to his restaurant's mission, hosting community events in their community room, raising money for local non-profits and community causes, and, more recently, demonstrating profound compassion and leadership in the wake of the protests and unrest in Minneapolis. As his neighborhood was burning to the ground he called out passionately for justice for George Floyd, saying, "Let my building burn. Justice needs to be served." Ultimately his restaurant was completely destroyed by the fires.

Thanks in part to huge community support from a successful Go Fund Me campaign, Gandhi Mahal is committed to rebuilding. In the meantime, we're excited for their temporary "Pop-up" location coming soon just a short distance away from their main property. For updates stay tuned to their website and Facebook page. 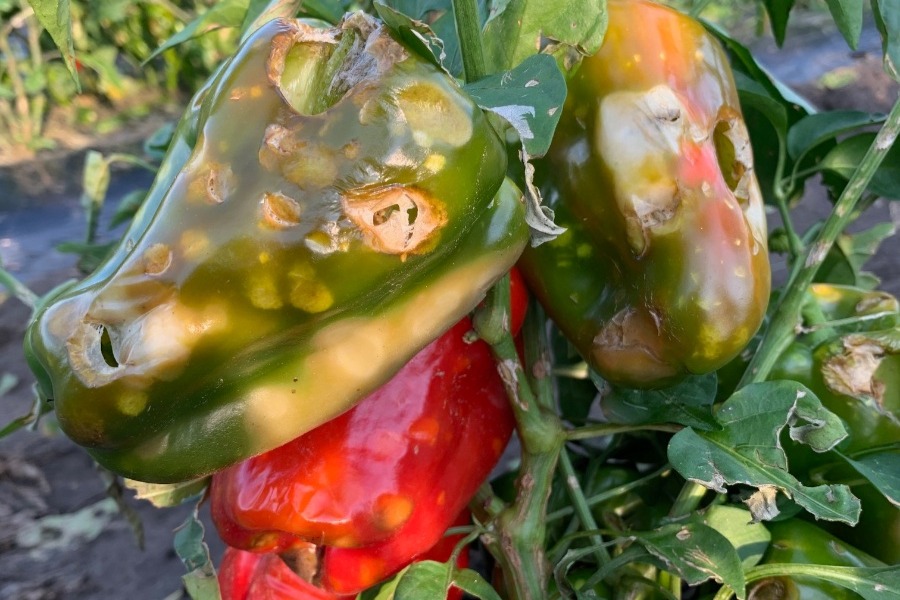 Southern Minnesota farms were dealt a difficult blow on August 10th, when a hailstorm arrived, severely damaging mature plants just coming into prime harvest season. You may have heard of crop insurance, but unfortunately those programs are designed for commodity crops like corn and soy. For example Sogn Valley Farm just outside of Cannon Falls suffered an estimated $100,000 in damages to crops—mainly bell peppers, hot peppers, and field tomatoes—destined for wholesale markets, including several local hot sauce companies.

Just as these farmers care for their community by providing food, the community is now rallying around them. Several hot sauce makers are making special "hailstorm" batches with salvaged peppers to support the farm, as reported by WCCO-TV.

In addition, a native plant sale this weekend, August 22-23, will serve as a hailstorm fundraiser.

Check in on Open Hands Farm too, who also suffered major losses from this hail. 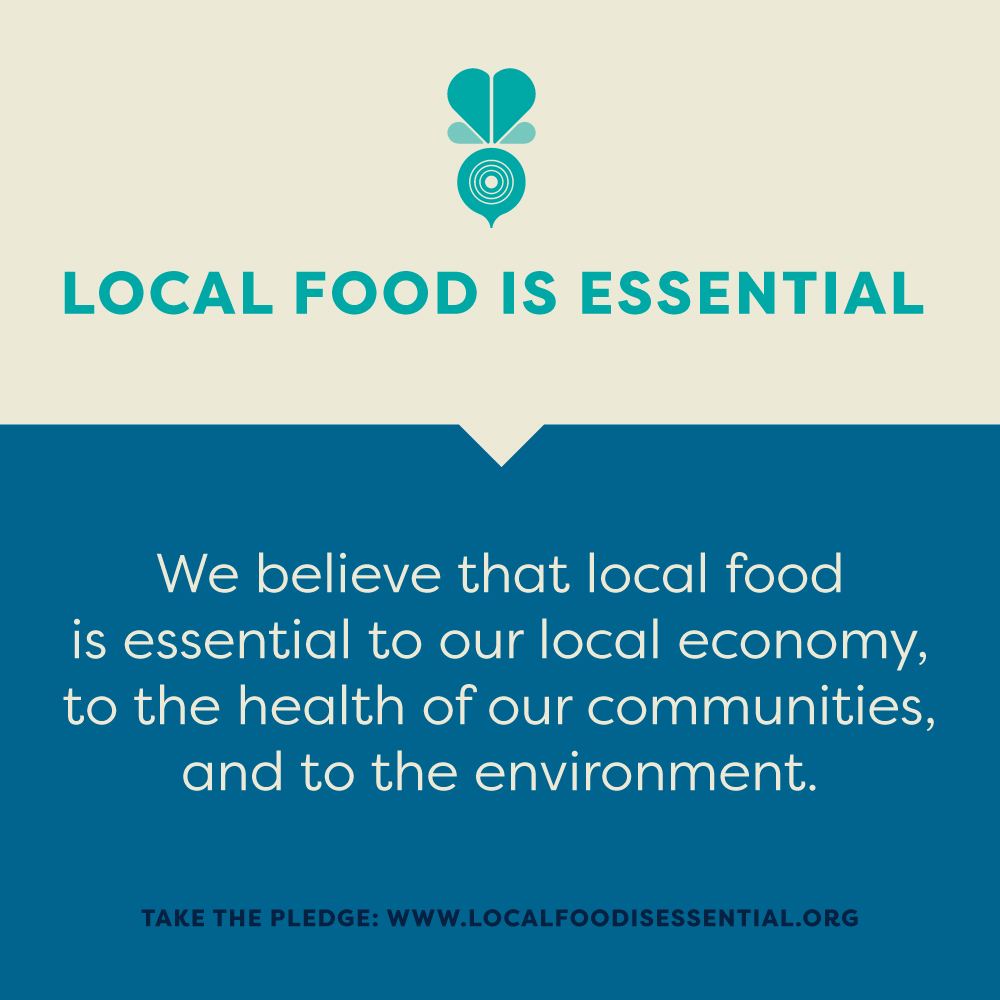 The Local Food is Essential movement, launched in July, was founded by local non-profits, businesses, and farming organizations in response to the unexpected challenges facing producers and makers in the MN/WI food system as a result of COVID-19. The premise is that local food is essential—to our local economy, to the health of our communities, and to the environment. More than that, the coordinated campaign is asking supporters to take action, starting with the Eat Local Pledge.

The pandemic has shown just how important and precarious food access can be, and how essential it is to have a strong, vibrant local food system. Unfortunately, local farmers and food producers who rely on sales to restaurants, schools, corporate campuses, farmers markets, and colleges face diminished access to these markets and may face financial consequences as a result. The Local Food is Essential movement is a great rallying cry around purchasing locally gown and made food products, in addition to offering ways to find local food and some fun merch. Check it out online and follow on Facebook, Twitter and Instagram.

Stay tuned for more details about how we're arranging for social distancing and capacity limits for FEAST! 2020, as well as our plans for online ordering and curbside pickup at this year's event!